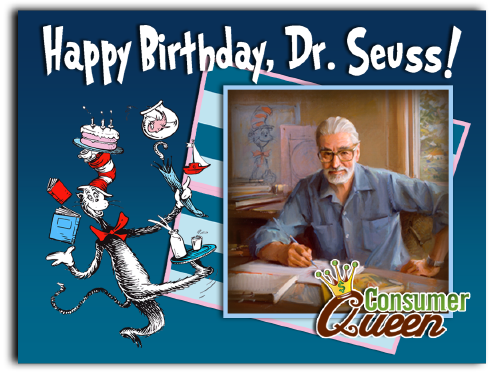 Today Consumer Queen wishes Dr. Seuss a happy birthday! Although he is no longer with us, his fabulous books live on in the hearts of children and adults alike!

One of our favorite books is of course “Green Eggs and Ham”, but who can forget “Horton Hears a Who” and “Cat in the Hat”.

Theodor Seuss Geisel, better known to the world as the beloved Dr. Seuss, was born in 1904 on Howard Street in Springfield, Massachusetts. Ted's father, Theodor Robert, and grandfather were brewmasters in the city. His mother, Henrietta Seuss Geisel, often soothed her children to sleep by “chanting” rhymes remembered from her youth. Ted credited his mother with both his ability and desire to create the rhymes for which he became so well known.

At the time of his death on September 24, 1991, Ted had written and illustrated 44 children's books, including such all-time favorites as Green Eggs and Ham, Oh, the Places You'll Go, Fox in Socks, and How the Grinch Stole Christmas. His books had been translated into more than 15 languages. Over 200 million copies had found their way into homes and hearts around the world.

Happy Birthday Dr Seuss! May your legacy live on 🙂

(Thanks to the Dr. Seuss National Memorial for bio!)

Score a free pack of wildflower seeds from Burt’s Bees. Once on the page, click the “get seeds” button and fill out the form and your seeds will arrive in about 4 weeks. CLICK this link to get yours.

This weekend we can earn some high value walk-in and scan kicks in honor of President’s Day! Below is a list of what you can earn. The 100 point scans are in limited supply so check your Shopkick app and get going! Not sure what Shopkick is? Shopkick is a FREE app you down load…

Coupon Codes| More Deals| Download Savings Tool Bar | Amazon Deals PetSmart Unveils Black Friday Deals for Every Pet on Your ListPre-Black Friday Sale Starts Nov. 25It’s the season for making lists and checking them twice so let’s not forget our pets. PetSmart® (NASDAQ: PETM) has something for every pet (and budget) this Black Friday with…

It’s BOGO FREE footlong coneys after 5pm tonite at Sonic. Be sure and check with your location to make sure they are participating before you head out. Check for the closest Sonic near you (and phone number so you can see if they’re participating)

Get your FREE sample HERE.