My Child has Ankylosing Spondylitis –

On October 16th, 1996 I gave birth to my beautiful baby girl. I only held her for a moment when they grabbed her out of my arms and rushed her to the NICU. They told me she had a 50%  chance of living ( she had swallowed amniotic fluid and meconium). I’ll admit my flesh took over and they say they could hear me crying all the way down the hall. I remember at that time, my grandmother  rushed in to my room along with friends and family. She came over to the bed and put her arms around me and said lets pray. I felt an overwhelming peace come over me. I knew know matter what, God’s hand was in it and there was nothing I could do. That sense of peace and faith is what helped me get through till we were able to bring her home a week later.

She had  a pretty normal life. She was such a good baby and had the biggest brown eyes you have ever seen. She never really had any medical problems until later in life when she got a chronic bronchial asthma. As she got into her pre-teen years she did complain of leg cramps but of course to me that was normal because I had cramps so bad that I would cry and I thought they were just growing pains. In the past year the pain seemed to worsen and within the last 6 months the pain had moved to her ankles, hips and back. The hips being the worse. We started getting calls from school with her hips hurting so bad she was crying and asking to be picked up from school. Advil would not help. Knowing that my husband has Anklyosing Spondylitis, we decided to take her to our family doctor for a checkup. When they could not find anything they made an appointment with a pediatric rhuemetologist. ( see my first post I’m Worn ) There were issues getting us scheduled at the pediatric rhuemetologist so we took her along with us to one of Daniel’s dr. appointments just to ask his rhuemetologist some questions. Praise God she agreed to take her on as a patient and take a look at her even though she was not accepting new patients.

On Friday March 8th I was packing for a work trip to SXSW and we were sitting in the Sonic Drive-In when we got this text. Taylor’s blood test came back positive for HBLA- 27 gene and all signs point to AS. Please call me at 4:00 today to discuss. I literally broke down in an hysterical sob. (Daniel and his dr. have a very close relationship and he even has her personal cell phone number. This is why we love her so much.)  My flight was to leave at 6:00 that evening so on the way to the airport we pulled over to the side of the road and called. She again said even though x-rays are clear, she has tested positive for the gene and all of her symptoms point to AS. They are also scheduling her for an MRI on the 19th. I can’t even explain what it is like to hear something like this about your child right before you jump on a plane to fly out for the weekend. I don’t think I had enough time to even process it or let it sink in? I just knew I had to be on 100% for work. We decided not to tell my daughter till we got back from my trip. I can’t tell you how hard it was to not tell friends or family but we had fear that something would slip and she would find out on Facebook before I had the chance to tell her myself.

I arrived in SXSW and let me tell you even though I was completely hysterical, hanging out with friends I haven’t seen in a long time who are also my co-workers seemed to really take my mind off everything.  I guess you could say it was a good distraction. Everyone was so sweet and offered whatever support they could. I was even able to connect with an old friend that I hadn’t talked to in a while and come to find out she had been going through some tough times as well. It was good to talk to each other about our experiences. I did pretty well until the very last night when I knew I would be flying home the next day to break the news. My  flight was at 6am and I had only had about 4 hours of sleep. I tried to sleep on the plane but it was so quiet that all I could think about was her. I laid my head against the window and covered my eyes pretending to sleep so that the passengers next to me couldn’t see me cry. Thank goodness it was a short flight.

I arrived in Houston at around 8:00 or so to find that my flight was delayed for 3 hours. Oh boy more time for me to be alone thinking about what I am going to say or what I am going to do. I mean I know that God is in control but your flesh can make you think and do some crazy things. Questions ran through my mind like, will she be able to finish school, will she be able to hold a job, will she find a good husband who will love her for who she is and take care of her even on those hard days. Wait… what is that I hear over the loud speaker? Ahhhhh my flight has been cancelled and the next available flight out is at 7:06pm tonight. I felt really bad for the lady at the ticket counter. I immediately burst into tears, and she just kept apologizing to me and I told her it’s OK I just have some stuff going on and just really wanted to get home. A few passengers sat and starred at me as I called my husband on the phone sobbing to tell him what was going on (poor guy). I just didn’t want to be alone right now. I did end up getting on a 2:41 flight.

I remembered the conversation my friend and I were having the other night on my trip about blogging about our personal experiences and how not only does this help me emotionally to talk about it but that we both believed that many people out there are going through struggles but just aren’t talking about it. So that’s when I decided to pull out my computer and write this post.

P.S. Please note we are not interested in different diets etc, or different cure’s or juices people are selling as we having already done a lot of research so please remember when commenting.Thanks 🙂

So now what? How do you tell your child she is going to be sick for the rest of her life?  Well I know one thing, I just need to be honest and tell her the truth. Let her know she is going to be OK and that she has a lot of support behind her. The talk went better than expected. Today she called me from school around 9:00 saying she was in too much pain. I went to pick her up and talked with the counselor and so far the school has been great. As soon as she stepped into the house she ran to the couch and started sobbing. All I could do was just put my arms around her and hold her. I said honey are you crying from the pain or because of the situation? She said the pain. It is so hard to see your child in that much pain. I am hoping the doctor will be able to figure out soon what can be done. God says he won’t give us more than we can handle so I hang on to that for hope. A friend of mine texted this to me this week so this is what I am trying to reflect on.

In case you didn’t know, I’ve started a 2nd blog called The Royal Family. Here you will find stories about my family, topics on Social Media, interviews with celebrities, random funny thoughts, inspirational stories, videos and lots more.  This will be a more intimate setting for my readers where they can get to know me…. 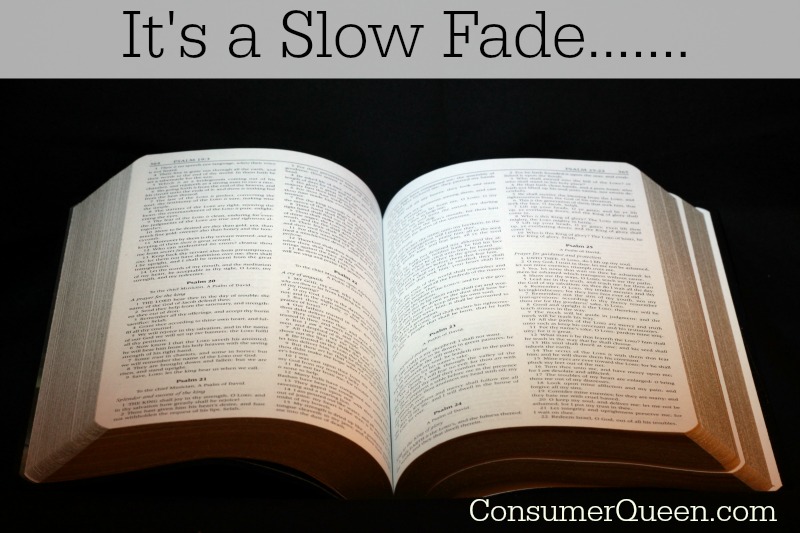 Is your life in a rut? Maybe it’s just in a “Slow Fade”.Are you asking God for mercy and grace yet turning your face away when it’s time to give back to him?

It’s been a crazy month and lately I have been just emotionally spent with everything going on. Sunday I hurt my back somehow and was down on Monday and worked from my bed. Even though I wasn’t feeling well I didn’t want to miss my Monday night ladies Bible study. My friend Gina came and…

Since today is my birthday I thought it would be fun to post some birthday freebies for everyone! There are alot of websites you can sign up for birthday deals and free meals. Enjoy! Carnival Cruse Line sent me this funny Birthday card ! Great American Cookie– In celebration of National Cookie Month they are offering…

I don’t know about you guys but the temperature here in Oklahoma has been over 100 degrees every single day this week. I thought I would share few ideas on how I keep my family cool and still stay within a budget. Make your own Popsicles – Every kid loves Popsicles and lets face it…

Well you know how you plan things and sometimes they just don’t come out right? Well that was how my weekend went. I Had planned to go to A Pampered Chef party and jewelry party for 2 ladies but Daniel had a bad spell this weekend. We did find out his disease is progressing…