This Slow Cooker Cherry Cinnamon Cobbler with Red Hots is Nana’s family recipe and one of my husbands favorites. 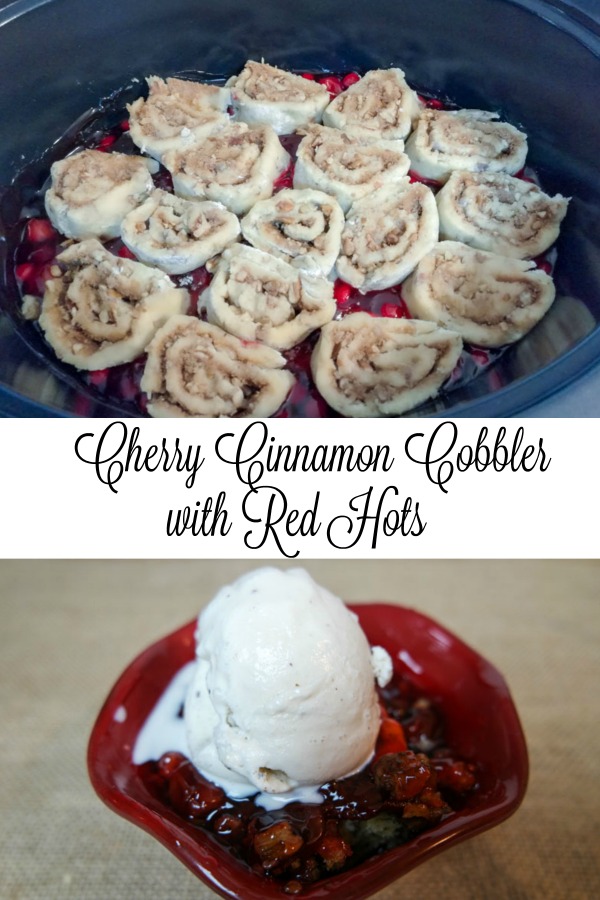 Family recipes that have been passed down can be a beautiful tradition.  My husband and I were married in 1995 and I knew right away that I had gained an amazing second family.

I love close families and Daniel’s family has family get togethers all the time, and of course every get together is surrounded by mounds of amazing food and recipes. 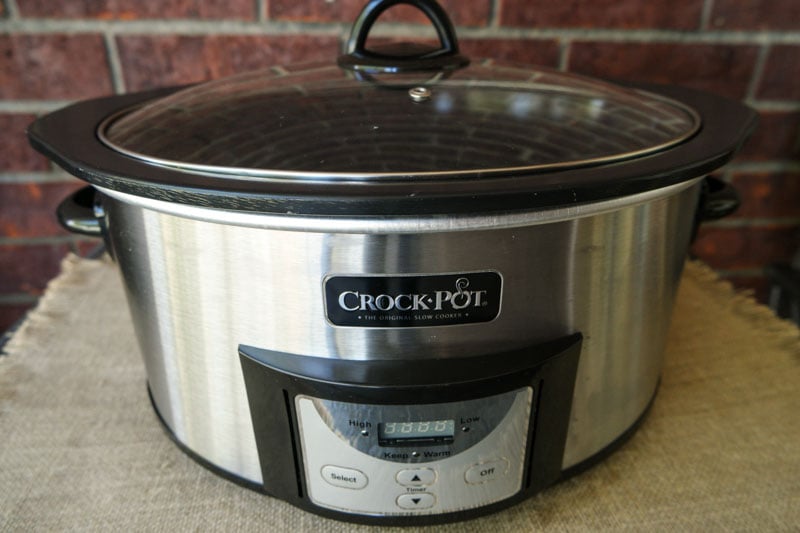 One of those recipes that are near and dear to my heart is grandma Margaret’s (aka Ma-Mar as the grand kids call her) Cherry Cinnamon Cobbler with Red Hots.

This was literally a staple at every get together and I was so excited when my mother-in law found the recipe after Ma-Mar had passed away. We decided to play with the recipe a little bit to see if we could turn it into a Crock–Pot Slow Cooker recipe and it worked! 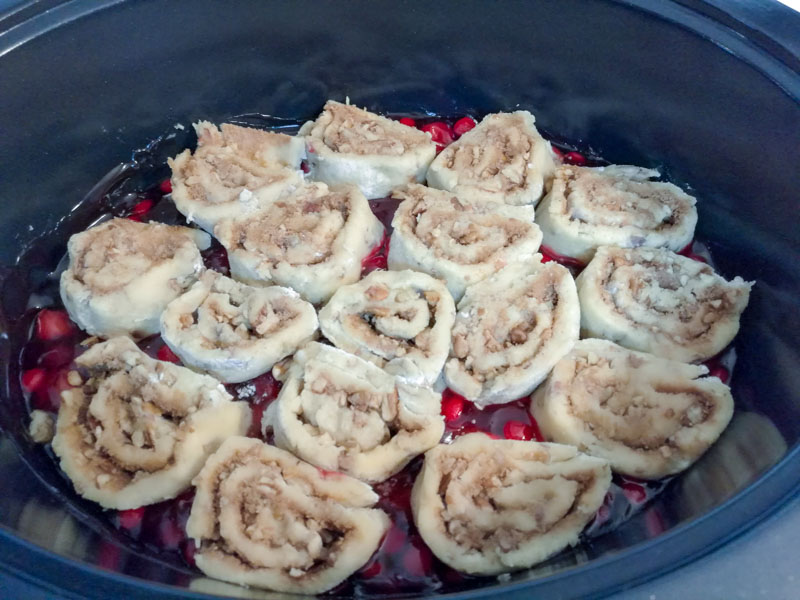 TIP: Adding a dish towel between the lid and dish as you cook, will really help the texture of your Cherry Cinnamon Cobbler with Red Hots turn out amazing! 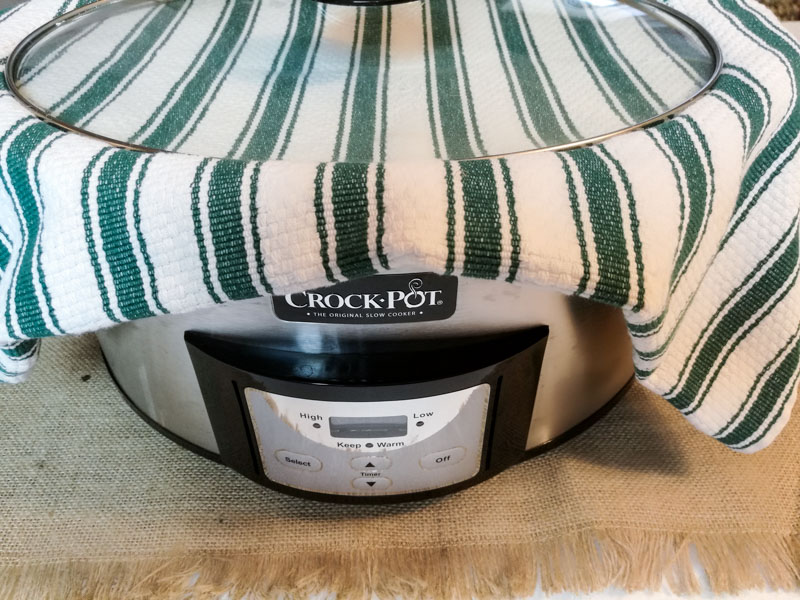 Other Uses for This Recipe:

When there’s leftovers, we’re not beyond having it the next morning instead of eggs, but I believe this would serve up beautifully for a special breakfast. Oh! I can already picture this laid out in my Crock–Pot® slow cooker on Christmas morning!  Holding back the ice cream of course, LOL! You can make up your own fresh whipped cream, and can add some to your coffee or hot chocolate for your little ones too. Oh Yum!

If you’ve never made your own you’re really missing out. Just put your metal bowl and whisk attachment in the freezer for ten minutes or until they’re nice and cold, then place 2 Tbsp sugar into the bottom of the bowl, add 1 cup heavy whipping cream, and whisk until you have still peaks. You can spoon into a cake decorator bag and pipe onto each serving.

However, I’m usually trying to save on time and clean up so I just use a ziploc bag and cut the corner off. Then it’s straight to the trash when I’m done. Easier still use two spoons and go straight from the bowl!

If you don’t have time to make the crust from scratch you can substitute two cans of refrigerated cinnamon rolls. Just take a can and cut the cinnamon rolls into fourths and layer the bottom of the slower cooker. Sprinkle some pecans.

Add your cherry cinnamon mixture then take the 2nd can of cinnamon rolls and also cut it into fourths and layer it on the top. Sprinkle pecans. Cook on low for 2 hours and pour frosting over the top when it’s done. 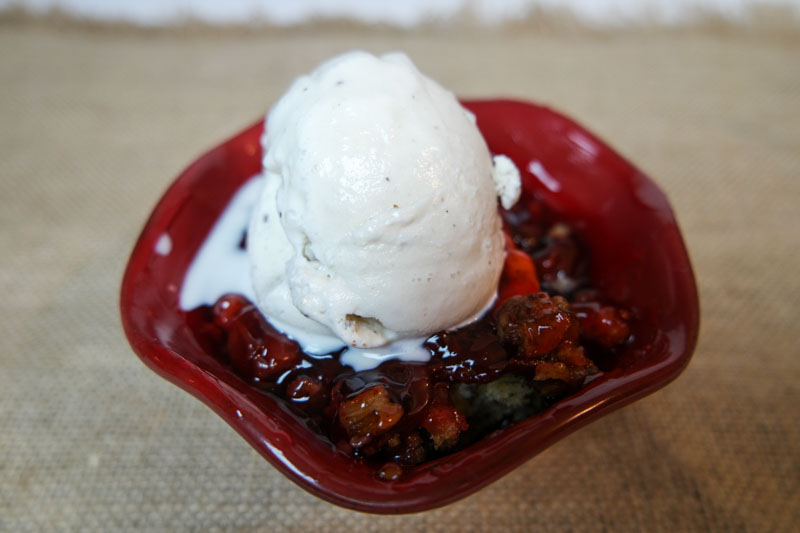 Want to keep this recipe in your favorites? Feel free to pin it on Pinterest! JOIN OUR RECIPE GROUP!

Update Information: This post was originally published on ConsumerQueen.com October 25th, 2016 and was sponsored by Crock Pot. Updated 10/21/19.

Original disclosure: This post is sponsored by Crock-Pot® Brand, but all thoughts are my own. 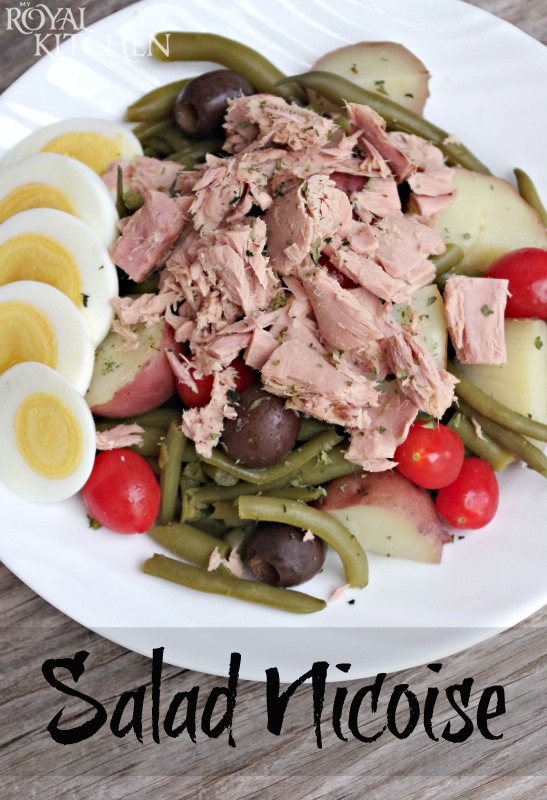 This is one of my favorite summertime meals because it’s light, simple, healthy and absolutely delicious!

Last week I was in NYC for the kick off of Hellmann’s Chicken Challenge.  I know what your thinking.  How does Hellmann’s and chicken go together?  The answer is DELICIOUSLY!  Hellmann’s has some amazing recipes that are super simple to make! The first one I want to share is the amazing Parmesan Crusted Chicken Now… 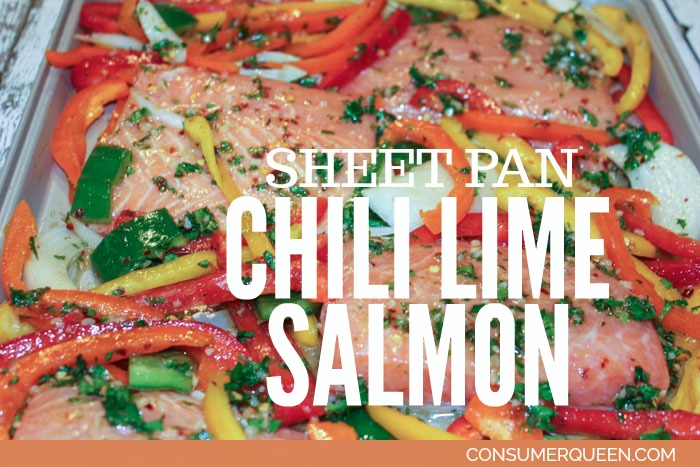 I love chicken Fajitas! However, I keep reading it’s important to get more fish into your diet. Our family has just never been seafood lovers. Enter Chili-Lime Salmon! Well, of course the flaky texture of perfectly cooked salmon is not to be confused with chicken, but the bold flavors and crunch of perfectly roasted fresh peppers with a hint of lime offset by the perfect amount of spice from a few red pepper flakes is definitely a winning combination!

Pumpkin Cupcakes With Cinnamon Cream Cheese Frosting. These cupcakes are a must-make this fall!

With the start of the New Year many of us are making resolution to live healthier. I’m also making my own goals to make healthier decisions…I may even exercise more but no promises! I’m taking some of my favorite recipes are trying to make them healthier. This week I was craving a chicken salad sandwich…

It’s almost time to set our clocks forward, and that means Spring is coming! As much as I love the warm weather that I know is coming, I’m using every last chilly day opportunity to relish my favorite soups! This is a Crock Pot Cabbage Soup that I hope you will enjoy! Enjoy!