Disclosure: This post is sponsored by General Mills, but all opinions are my own.

I have a huge weakness for cinnamon rolls, I must say. They are my all time favorite breakfast. If I order a breakfast pastry from the grocery store or a restaurant, it will be a cinnamon roll, every time!

Over the years I developed my own homemade recipe for traditional cinnamon rolls, which I have memorized from so many batches. The only downside to cinnamon rolls…we all know what it is…they take forever to bake!

To me the obvious solution to this dilemma was my slow cooker of course! The key was creating something gooey, covered in icing, and didn’t require an hour of working in the kitchen. I was able to find these Pillsbury Cinnamon Rolls with Cinnabon Cinnamon at Sam’s Club.  They are easy to find in the refrigerated section!

The primary ingredient for this Cinnamon Roll Monkey Bread is regular store-bought cinnamon roll dough! I do prefer the Pillsbury Cinnamon Rolls with Cinnabon Cinnamon.

You need a total of 16 small cinnamon rolls for this recipe, which is 2 cans.

This recipe is so great for this time of year, since I really enjoy baking in general. A special breakfast to take to church or to work rarely leaves any leftovers.

This Cinnamon Roll Monkey Bread is actually more popular than cookies, it seems.  I think the days leading up to the holidays just call for cozy breakfasts and delicious treats!

I’ve always loved baking but honestly don’t need all this at home for just a couple people, so it’s the perfect time to Be a Merry Maker for the holidays.

Open two of your cans on a large cutting board. I just open one can at a time.

Have your slow cooker ready with parchment. If you don’t have parchment, keep in mind the cinnamon rolls may get pretty crispy around the edges!

Keep a close eye on it to make sure it doesn’t get overdone.

You will then take a sharp knife, large enough to cut through each roll. Cut each roll into 4 quarters.

Keep the icing packages and set aside.

Before the cinnamon roll pieces go into the slow cooker, however, they are going to get a bit more flavoring first!!

In a second microwave safe bowl, melt your butter or maragarine.

It’s debatable on which is better for cinnamon rolls, butter or margarine. Since you’re using the pre-made store-bought biscuits on this recipe, you really do not need to worry too much. You can use what you have in the fridge…this recipe won’t mess up. 🙂

Next, in a third small container or measuring cup, have your brown sugar ready.

The butter and the brown sugar will be used as a layer, which you will just pour between layers of the dough.

This might be the “lazy” version of Cinnamon Roll Monkey Bread. I see a lot of recipes that mention coating each dough bite in butter. That takes me forever, y’all. We are already saving time using pre-made dough, so we don’t want to stand in the kitchen dipping each bite in butter!

This recipe is all about getting breakfast cooking so you can go about the rest of your busy morning!

Finally, everything should be ready to go in the slow cooker. Add half of your dough bites right in. I do spray the parchment to give it some extra help not sticking!

Pour half of your melted butter or margarine over the dough, and then sprinkle half of the brown sugar.

Repeat for a second layer.

Turn your crock pot on low, and cook for two hours. I always check after one hour, and generally keep an eye on it as I am walking through the kitchen while it’s cooking.

All crock pots are different, and bread dough can be one thing that really varies with differences in heat on the crock pot. So, just make sure not to forget it or leave the house, for best results.

After your Cinnamon Roll Monkey Bread is done in the middle, you can serve immediately.

Open lid and add the icing that comes packaged with the cinnamon rolls, evening out so the entire top is coated. Return lid and turn crock pot to OFF setting.

Even if you’re not eating the bread immediately, the WARM setting may dry these out over time.

Why Shop at Sam’s Club for the Holidays?

I have a lot of extended family, and as I mentioned, I love taking the opportunity to bake and share the festive, traditional flavors of the holidays. With hosting comes larger shopping trips, of course!

Sam’s helps me limit those store trips during the busy holiday season, and just grab larger sizes of my must-haves like the Pillsbury Cinnamon Rolls, flour, sugar, butter, and of course staples like milk and bread.

I do use my Scan and Go app to avoid crowds, which to me is a priority during the holidays! Hope you can try this amazing recipe soon!

2. In a glass bowl melt butter. Then mix in the brown sugar and stir well.

3. Line your 5-7 quart slow cooker with parchment paper. ( if you don't have any, spray your crockpot with cooking spray). I like to use coconut oil spray.

4. Cut Cinnamon Rolls into quarters on large cutting board.

6. Place 1/2 of the pieces of cinnamon rolls to the bottom of the slow cooker.

8. Take 3 sheets of paper towels over the top of the slow cooker and place the lid on top to hold the paper towels in place. (This will catch any moisture that forms on the lid)

7. Cook on low for 2 hours. Because slow cookers can be different , I always check it after the first hour. If the edges are brown and the middle looks a little gooey, just do the toothpick test because it should be fine that way.

8. Turn off your slow cooker and let it stand for 5 minutes.

9. Pour over the icing that came with the cinnamon rolls over the top and serve.

When using the parchment paper it keeps the dough from sticking to your slow cooker as much for easy clean up.

Check out some of our other favorites:

Last time I was at the store my daughter (the picky eater) begged and begged for apples. I was happy that she wanted a healthy snack, so I bought a whole bag! Well turns out she just wanted to re-enact Snow White. So I have a bag full of apples each with one bite missing….

Breakfast is one of the most important meals of the day but it’s not always the easiest to do. It always seems like my family is in a hurry and honestly I am tired of handing my teens a poptart in the morning. I want them to have something that is still quick and easy… 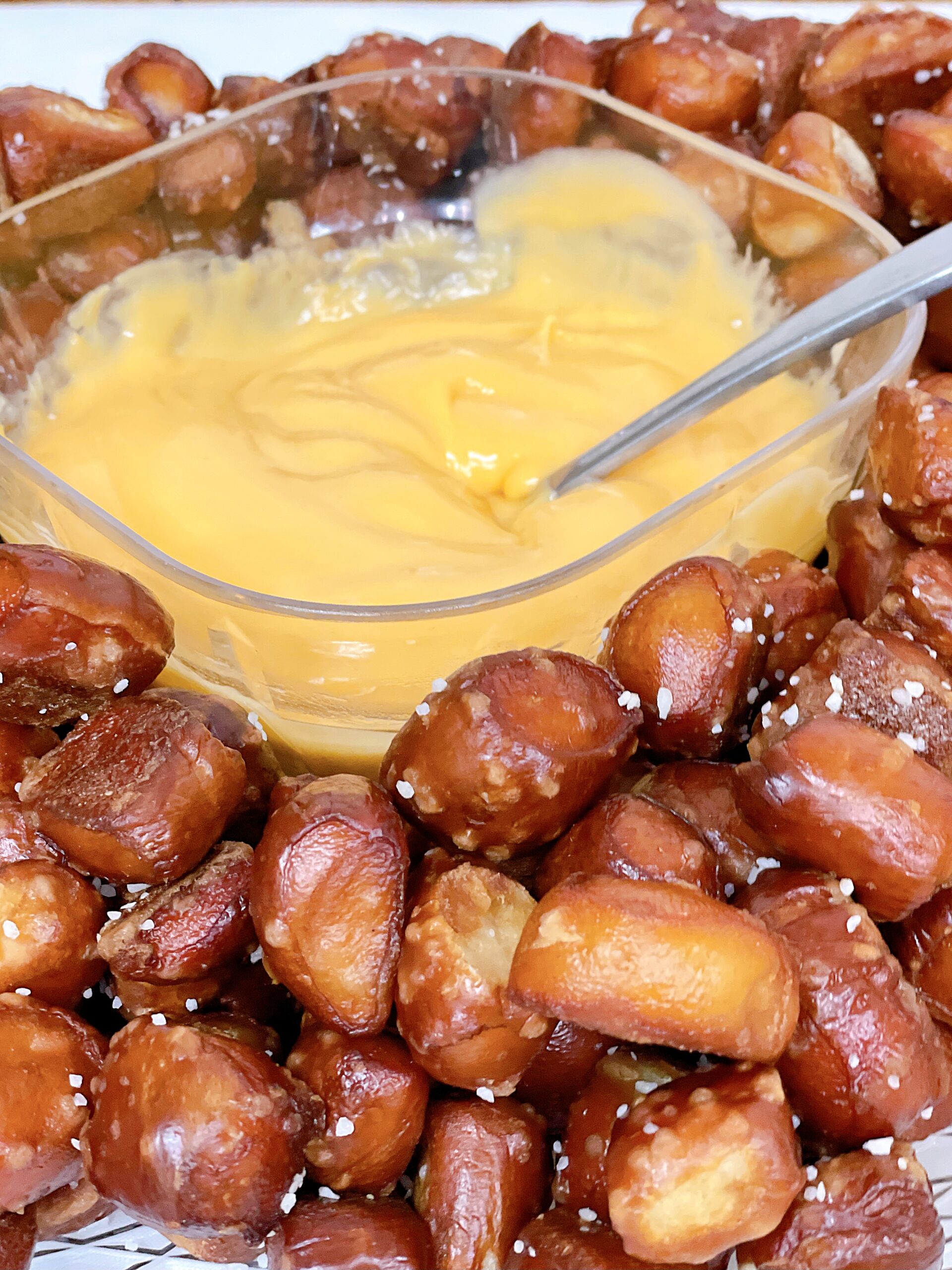 Click the link to learn how to make these Warm Soft Pretzel Bites. So easy and delicious. 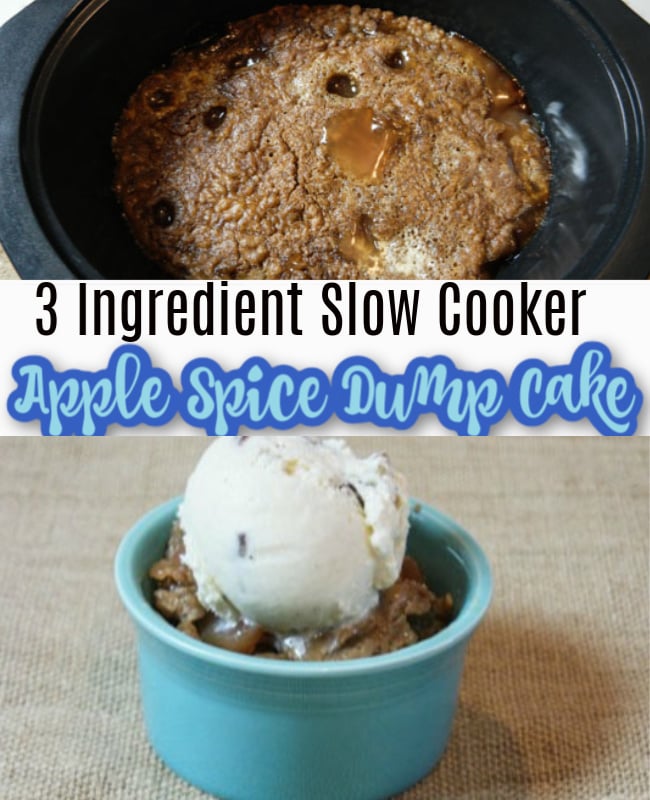 My favorite flavor this time of year has always been pumpkin. Well, at least it used to be. Don’t get me wrong-I still love pumpkin, but with the current tis the season for everything pumpkin, anything not pumpkin spice is on my menu. Apples, cherries, blueberries, anything, but pumpkin! Enter my friend- The Dump Cake! This week, I think Slow Cooker Spiced Apple Dump Cake is what I want! Next week?? I’ll have to think on that. 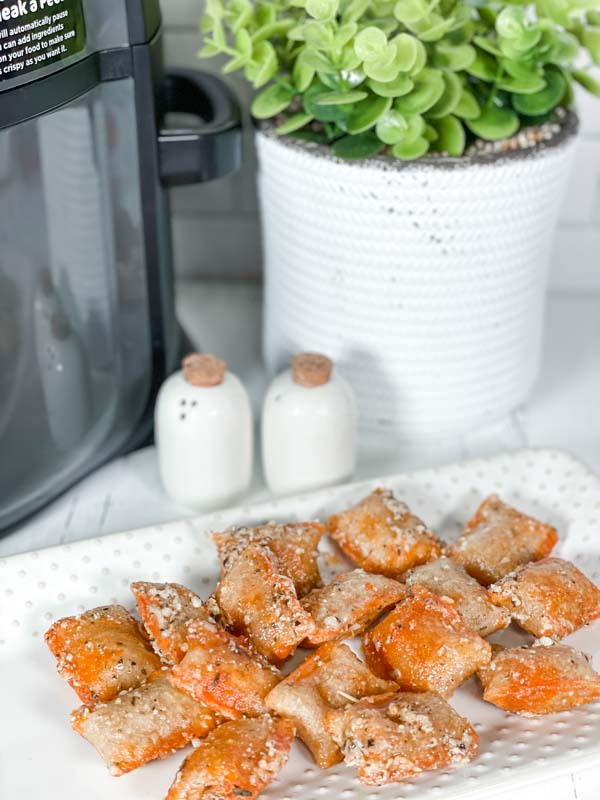 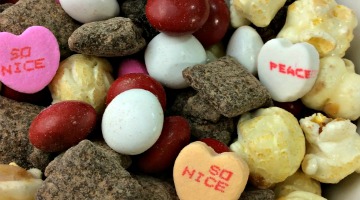 Oh, how I “heart” popcorn! It’s absolutely one of my favorite snacks! With This Valentine’s Day Treat- 5 Cherry Muddy Mix you’re sure to hear this sweet snack is SO NICE! Just as those tiny hearts predict! This starts with yummy kettle corn and chex cereal, then you’ll add in as many or as few as you like of M&M’s, sweet dried cranberries, and of course no mix would be complete without those delightful conversation hearts that we all love.